My favorite holiday.  Stuffed with gratitude and full bellies.

Smaller cookies, a couple of bites in the eating, were requested this year.  Pondering what a bunch of small sized turkeys, baby turkeys if you will, would be called in the MMB world … I settled on gobble.lets or  goblets for short.  (okay, technically baby turkeys are called poult.  But I didn’t want anything even remotely associated with pouting around my poultry…).  Set in the colors of autumn (mixtures of Americolor egg yellow, orange, terra cotta, chocolate brown and wedgewood blue), I channeled random visions of Thanksgiving crafts over the years.

This little guy was shape shifted from a maple leaf. 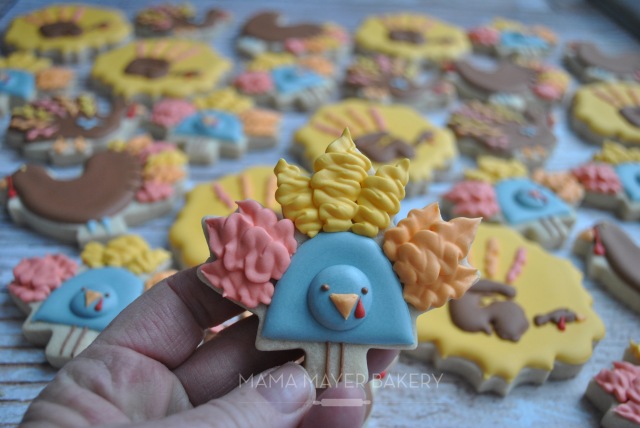 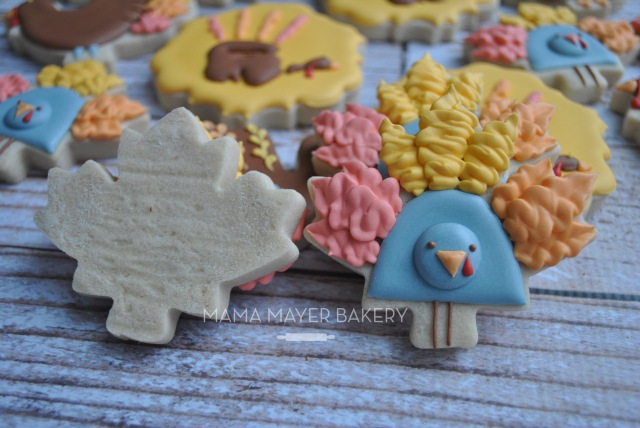 Thankful for people who brought others into their community. For the folks who had more that chose to help those who were struggling. Who, although they didn’t understand each others ways, sat down at the table together. Thinking of that first Thanksgiving celebration today.

Yes, yes.  We love Thanksgiving, what with family, friends, food and all. But sometimes there are those awkward moments where the conversation falls off and … Like Cards against Humanity, here are some topics that can reboot that dinner table chitchat to awesome(Cranberry)SAUCE.  Interestingly, turkey has no more L-trypotophan than red meats, cheese, chocolate, oats… but, hey, where there’s a couch, there’s a way! Happy Napzzz! 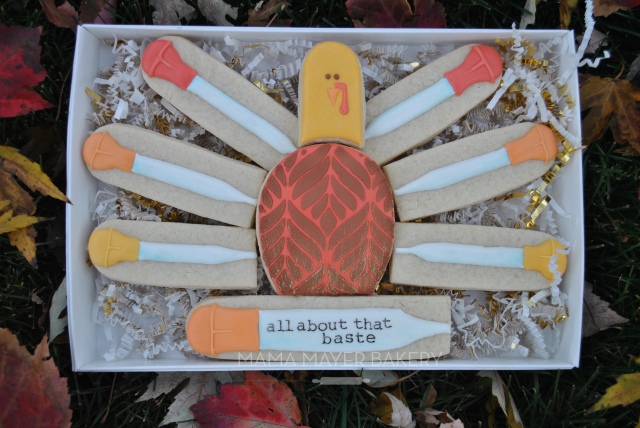 Hope you ride the gravy train over the turkey terrain to Mount Mashed Potato. May your pies pile up to the skies.

Grateful for my family, friends, and followers… oh and grateful there’s no rationing of sugar and flour.  (Cookie cutter Bed moulding from Truly Mad Plastics , gold background stencil Killer Zebras, ‘give thanks and sweet as pie stencil from The Cookie Box).

My best to you all! 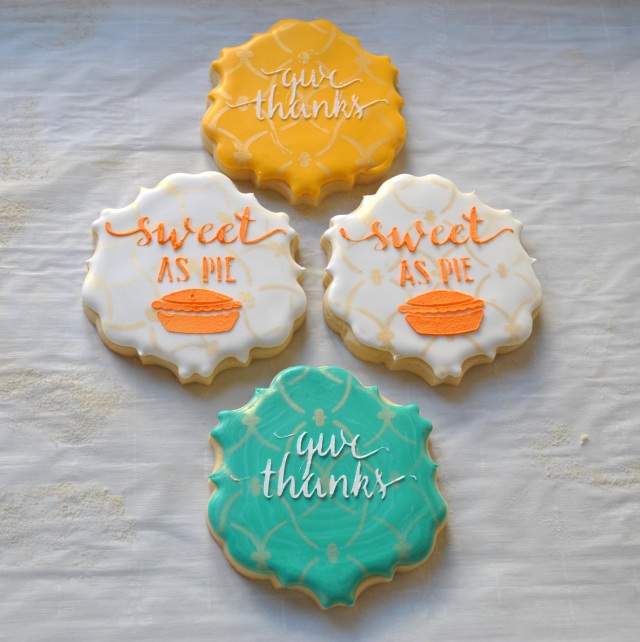 My sister has been hosting Thanksgiving for untold number of years and it it is my God given duty to bring cookies for the dessert table.  Usually, that table is quite full so this year I made turkeys just for the kids (by that I mean mentally a kid so it qualifies a few more folks than you would think). These cookies combined The Cookie Architect designed wave cutter with a small candy corn cutter (both found at the wonderful Truly Mad Plastics web site.) The colors utilized were Americolor egg yellow, orange, chocolate, and sky blue (each icing batch had a drop of egg yellow gel to balance all of the hues).

Oh yeah.  And one of the turkeys is not like the others.  Getting my Sesame Street on. 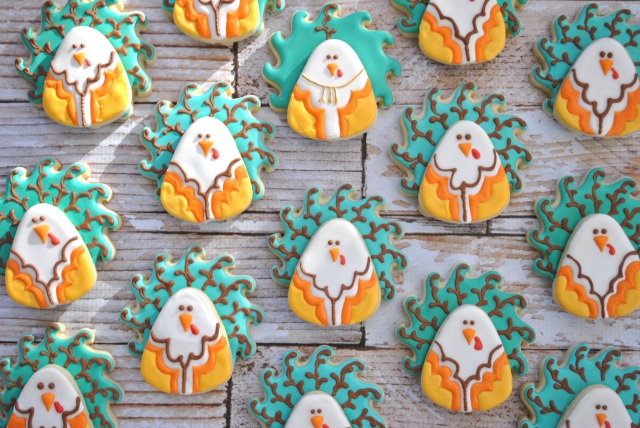 Signed by George Washington on October 3, 1789 and entitled “General Thanksgiving,” the national decree by the fledgling government appointed a day “to be observed by acknowledging with grateful hearts the many and signal favors of Almighty God.”  Later, on October 3, 1863, President Abraham Lincoln issued a proclamation calling for the observance of the fourth Tuesday of November as a national holiday. In 1939, President Franklin D. Roosevelt moved the holiday to the third Thursday of November (to extend the Christmas shopping season and boost the economy). After a storm of protest, Roosevelt changed the holiday again in 1941 to the fourth Thursday in November, where it stands today (taken from earlyamerica.com).

Here is the cornucopia of cookies I am taking to our celebration.  There are a lot of people coming, and with the pies and other desserts also being served,  I felt like bite sized cookies were most appropriate.  Hope yours is happy, fulFILLING, and nap worthy. 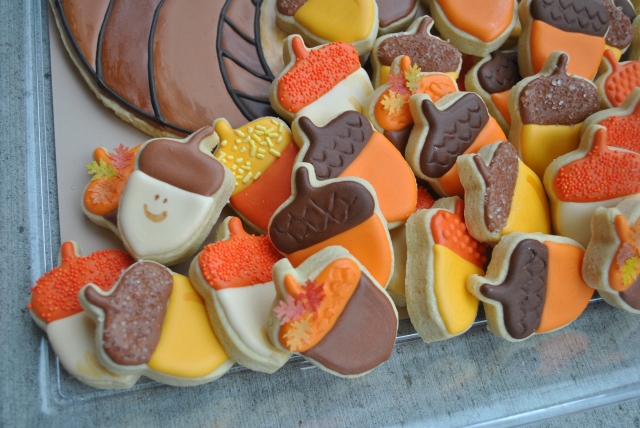 All the leaves are brown and the acorns are (not) grey (cue Mamas and the Papas)! 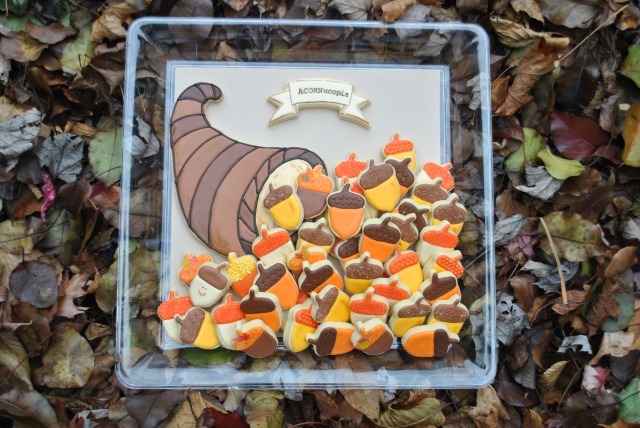 My favorite holiday.  Family, friends, food, and a long couch on which to take a nap.  Oh, um, and a little odd sense of humor 😉

T.Hanks.giving thanks.  (so sorry Tom Hanks.  your acting and name are perfect.)

Decree of thanks to all who follow this blog.  Especially thankful for our 2 daughters (without whom I wouldn’t be creating cookies or have learned how to blog.) 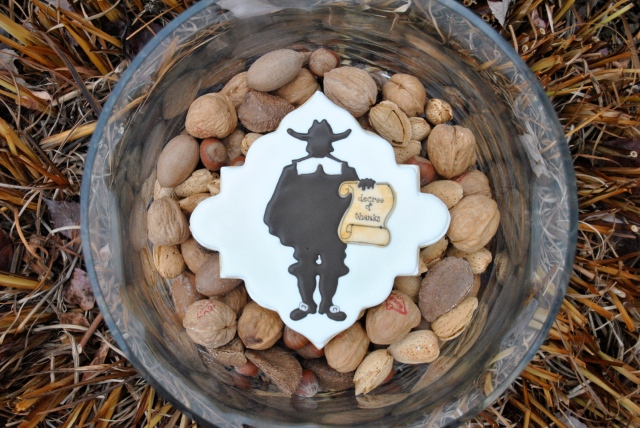